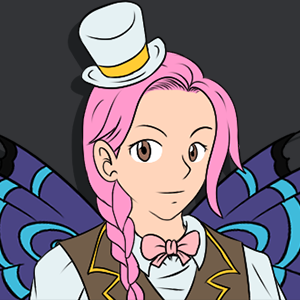 Use this for a lyric or tagline. Use the code in the Simple CSS box to center it.
Use this for a quote instead of a tagline. Pick one or the other.Quoted
BasicsAppearanceCharacterHistoryAbilitiesRelationshipsGallery
Played By:

Describe what your character looks like here. Describe the basic stuff like their general height/weight/build, hairstyle and color, what their eyes are like. Does their physical appearance belay their chronological age? Describe the color and texture of their skin, whether they have scars or tattoos, fur or wings or horns or claws or anything of that nature. What sort of outfit do they usually wear, and what's their general fashion sense? If they shapeshift, be sure to describe their other forms as well!! While this section is freeform, do try to provide detail if you can - especially if you don't have a solid image of your character design.
Personality, quirks, and other assorted 'about me' information. Essentially, what's your character like? Their general mood and temperament? Do they behave differently around some people, or some types of people, than they do around others? What do they like to do for hobbies, what do they hate? Do they have a job or career, or have they in the past? Other aspects of their overall identity go here too - gender and sexuality, whether they are or are not seeking romance, what their 'type' is, things of that nature.
What has this character's life been like so far? How was their childhood? What's it like where they live, and what have they accomplished there? Have they moved around a lot? Do they have a family or significant other? Have they been involved in any particular conflicts? Describe anything and everything significant that's happened to your character before the 'present' time. Even if you prefer short and sweet over long and detailed, this section should most likely be your most informative.