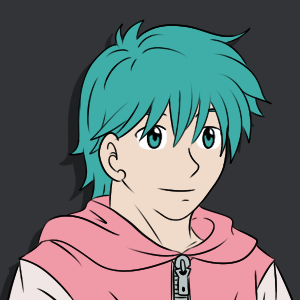 I don't like fighting...but if it means I can help senpai, I have to get stronger!!Ten
BasicsAppearanceCharacterHistoryAbilitiesRelationshipsGallery
Played By: Esjitu

Figure/Build: Short and slender. Is just at the onset of puberty and hasn't filled out yet, though he has bulked up a little since he began training with LG.

Hair: Turquoise and a bit long in the back. He currently keeps it straight and relatively neat. A year ago it was short and curly/wavy.

Ten sometimes wears a 'scanner' device on his face. These are standard issue among students at IGNO University.

Since he is young and still going through puberty, Ten's appearance may still change. He has already become a bit more mature-looking in the past year since he met Azaran.

His favorite color is pink and he often wears pink clothing.

Personality: Ten is generally calm and collected in most situations. He can sometimes be quiet and timid, and is much more of a follower than a leader in life. While he finds it difficult to make friends, if he does find someone he can call a friend he will attach to them and never let go, to the point of being annoyingly clingy (just ask Azaran). In general he has an upbeat attitude and really enjoys learning (though his grades are average and he does struggle in many subjects). His interests are average for a boy his age, though he doesn't care for sports and physical activity as much as he enjoys watching foreign cartoons and writing his own stories (ScanFiction) to share with others on the internet.

While he loves to learn, Ten has hated going to school ever since his family transferred him to IGNO University's middle school campus, where he is often bullied. Things have improved somewhat since he began tutoring with Azaran and training in martial arts with LG, mostly because he has matured and doesn't respond as much to the bullies' provocations as he used to. Still, Ten prefers going down to the lake in the park and feeding the ducks more than hanging out with friends his own age - since, aside from Azaran, he has none. His only other kinda-friends are a talking tiger and an extremely famous (and eccentric) adult man, but one could argue as to whether or not this is healthy for a boy his age...

Though he is still young and learning about his sexuality, Ten identifies as gay. This isn't simply because he felt close to Azaran in particular - Ten has been attracted to boys for many years, though it wasn't until he approached the age of puberty that he began to understand what those feelings meant. Since homosexuality in IGNOLand is commonplace and not particularly discriminated against, this shouldn't pose much of a problem for his life. However, Ten is still a bit embarrassed about his feelings, and is only 'out' among a handful of his closest 'friends'.

Ten used to have a speech impediment (rendered as him Typing Liek A N00B All The Tiem - see the OOC notes in the 'History' section) but through his tutoring with Azaran he has almost completely overcome this. Expect it to continue to crop up in flashback scenarios, though.

Ten is a huge weeb* and loves watching action cartoons, especially those with plucky young heroes. He has even taken up the mantle of 'Sealboy' unbeknownst to all, hoping to emulate his idol Penguinman (who he does not know is Azaran) and be like the heroes in the TV shows he loves. Unfortunately he's pretty inept at the job and tends to bungle things more than he helps, so perhaps it's a good thing that he's too busy with school to show up often.

Since Japan doesn't exist in IGNOLand neither does 'anime' - at least by name and foreign association. Of course there are still cartoons in the style of anime and with all the common tropes, and thus obsessive fans of these cartoons bearing similarities to weeaboos and otaku still exist. Since Ten fits squarely into this archetype I label him a weeb, which in IGNOLand embodies much of the same negative stereotypes and is used in the same sense, but let's pretend it's derived from the word 'dweeb'.
Ten and his brother Tru were both born as inside jokes who developed personalities (and names) later on - they were not originally meant to be proper characters. It started with a young (11-12 year old) Bradios' obnoxious weeaboo persona on the old Dragonball forum where we first met, which LG decided to parody a few years later. LG created the persona 'UTTF4L' (UltimateTrutenFan4Life) based on Brad's old username and used it to write deliberately bad DBZ fanfiction. In response to that, I (SG2) created my own persona - 'UYF4E' (UltimateYaoiFan4Ever) - writing bad fanfiction of a similar style, but centered on the IGNO universe. Since LG played UTTF4L as an uppity little brat (a common type of 'kid on the internet') I decided UYF4E should be the opposite kind - making him shy, timid, and naive about the ways of the world. Ergo, Ten began life as a parody of a parody...

This then evolved into in-jokes in IRC where LG and I would sign in as these 'characters' and interact like nOObs using the internet for the first time. Both were even given their own TekTek avatars as shameful ripoffs of Bradios' character design, with slightly different hair colors and styles and even wearing 'scouters' on their faces. Only later did we decide that we made use of these joke personas frequently enough that they, at least, deserved names. The names 'Tru' and 'Ten' were in fact derived from TRUnks and goTEN from Dragonball Z, in homage to their origins. We determined that their similar appearances and behaviour was a result of being twins, and everything else followed from there. Incidentally this is also the reason for Young Ten's 'speech impediment', originating from Da Old Wayz Of Tiping Liek A Idiote that began with his parody fanfiction.

Ten grew up in an orphanage with his twin brother, Tru, when they were too young to remember their birth parents. When the boys were the age of 7, Ten was taken by a foster family, leaving Tru behind. Ten was passed around between many foster families between the ages of 7 and 11, and while there were one or two less-than-adequate homes he was never there very long, and the majority of the families he lived with were perfectly wonderful. All the same, the constant switching of families and moving to new towns took its toll on the boy. Finally, when he was 11, Ten was adopted by a permanent home where he has lived happily ever since in the IGNO City suburbs. Now Ten attends the middle school branch at the nearby IGNO University campus, which is where he met Azaran...and reunited with his twin brother.

Ten and his brother Tru were very close before they were separated, but things have changed in the years they've been away from each other. Though both had been overjoyed to meet again all these years later by bumping into each other in IGNO City, that affection quickly cooled as Tru revealed he still resented Ten for being taken away from the orphanage and leaving him there alone. Apparently Tru's childhood was not as happy as Ten's, and even though Tru had finally been adopted by a loving family of his own he could not work past those issues quite so easily. The two are now at odds and have been known to get into fights when they come across each other. This has lessened a bit over time, but they are still not as close as they had been back then.

Besides Tru, Ten's most notable relationship is with Azaran. After more than a few failing grades, Ten's parents set him up with an afterschool tutor to prevent him from being held back a grade and becoming even more ostracized by his peers. At first, Ten hated the idea of having to work with a tutor (associating all kids his age as bullies), and Azaran was no less frustrated having to work with an annoying kid like Ten. However, seeing how badly Ten was being bullied set Azaran off, as the sort of person who despises watching the strong take advantage of the weak. Thus he began protecting Ten from his bullies, but it quickly became apparent that this was teaching the boy nothing but how to cling to his leg and cry 'senpai' all the time...when the time came that Azaran was the one who needed to be saved, Ten began training with LG at his lighthouse dojo. Now Ten has a decent control over his Water element and can fight to protect those important to him when he has to.

It has been over a year since Ten and Azaran met. Ten is now older, wiser, and even a bit more mature - though now it's time for the Embarrassing Teenage Years...

Recent Events: Learning To Love You
As this is a flashback RP, it's not really 'recent' in the sense of Ten's current developments. However, though slow going, this RP is shedding more light on Ten's backstory and how he and Azaran initially became close, filling in some of the blanks left behind by his OOC origins.

Skills: Ten was originally a kid without any particular skills in any areas, in or out of combat. However, since he began training with LG, he has developed a great deal of control over his Water element and basic self-defense. Physically on the weaker side, Ten prefers to employ his ranged elemental abilities instead.

Weaknesses: Ten is very poor at making his own decisions. If someone isn't around to tell him what to do, he finds himself very lost. He also hates being alone in general. Though he has been with his adopted family for 3 years, he still has deep abandonment issues and fears that he may be passed off to another family like in his foster days. Fortunately he has been maturing in this area recently, trying to become more independent and less reliant on others.

Weapon/Combat Power of Choice: Ten had never had much reason to fight, and could probably not throw a punch if he wanted to. This, combined with his timid follow-the-leader attitude and status as 'that homeschooled kid' made him a prime target for bullies. Recently he's been training to stand up and defend himself at LG's dojo and has gained control over his Water element. Ten's style is similar to waterbending (excluding ice-related abilities) both in terms of water control and his general martial arts movements.

Younger Ten crying after being bullied.

Ten once upon a time. The gun is a toy.