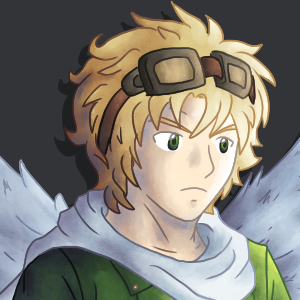 He had it coming. What did you think this was, anyway? Some kind of comedy story? This is what it's like in the real world...not that Bones' friends would know anything about that.Azaran
BasicsAppearanceCharacterHistoryAbilitiesRelationshipsGallery
Played By: LG

Occupation: Student; volunteer at the Sanctuary; member of The Straight Experience; crime fighter

Figure/Build: Not skinny but not built, a healthy middle.

Azaran is a Zedkiel, a winged race with two distinct tribes. Azaran's tribe, the northern Zedkiel, have an almost angelic appearance with soft white wings coming from their backs. They usually have pale features like light skin and hair.

General Temperament: Azaran has a hard time staying calm when he seems something he deems as wrong. Generally, unless something wrong is going on, Azaran will act uninterested and cold toward people.

Personality: Azaran is bratty individual. He believes that the world should be just and fair and he is quick to jump into a battle for what he deems is the greater good. He is not always the best planner but he goes in with good intentions. He tends to hold grudges and at times can be very childish and naïve due to coming from a small village away from the outside world.

Azaran volunteers and helps maintain a shelter/sanctuary for homeless and underprivileged people in IGNO City who are not helped by Bones' government. Recently however Bones has provided him some funds to help out the Sanctuary's maintenance.

Azaran is also the youngest member of the IGNO boyband The Straight Experience. This was one of the few types of jobs available to a kid his age without a high school diploma and he gladly took it, putting all his funds towards helping maintain the sanctuary, even if the fangirls annoy him.

Azaran was born in a small village called Normount in the northern Ice Plains region of IGNOLand. He had a secluded childhood with very little contact with world outside his village. When he heard from a traveler of the amazing IGNO City he had to see it for himself, deciding that the outside world must be a wonderful place. He left his tribe to travel to IGNO City and hoped to see the world for the first time, but the outside world wasn't at all what he expected.

When Azaran first left his village he was hope filled and overjoyed at the wonders he saw, but he did not expect that when he got to IGNO City that the world would be such a harsh place. Everywhere he looked he saw struggling people in need. He often wondered why the supposed "heroes" of IGNOLand were not doing anything to clean up the city and help these people. Deciding that there was no other alternative, he took the problem into his own hands.

First he helped to establish a Sanctuary to shelter the homeless people on the streets of IGNO City, cleaning up an abandoned building near the Gas Station Next Door to use as their base to give them someplace warm and safe. Of course Azaran didn't own the building and wondered if it was "wrong" to use it for his purposes but he had never seen anyone there and figured if it was abandoned it could at least be used to help people who had nowhere else to go, even if the government argued about him not having a license for it. Laws should exist to help people and he was beginning to see that Bones' laws only seemed to help himself.

Azaran began to take on odd jobs around the city to help pay for living expenses like clothing and food for the Sanctuary. However he was unable to get a proper job in the city because he was told that he was too young, and kids his age needed to at least graduate high school before they could work. Even though Azaran had already graduated from the schooling system in his village, it was treated like it didn't count because it wasn't "official" and he didn't have a diploma to show for it. Azaran had no choice, if he wanted to work he would need to go to school. He hoped at least he could graduate quick by showing that he was smart enough to be on his own, and ended up striking a deal with the principal of the school that he would only need to attend classes on exam days as long as he helped tutor some problem students who needed help. This was a pain to Azaran who wanted to use that time to help make a real difference in the city instead.

This tutoring program is how he met Ten, and though he hated the kid and how annoying he was at first eventually the two began to become closer and start an official relationship. They have had their hardships and ups and downs over time but they are still going strong.

Unknown to everyone, Azaran is actually the hero Penguinman who fights crime by night in IGNO City. He realized that helping the homeless during the day is only part of the problem and wouldn't solve all the corruption going on unless someone took action against criminals, and it was obvious that Bones and his incompetent police force were not doing a very good job of it. Azaran believes he is standing up for the greater good and hopes that he is sending a message to the higher ups in IGNO City that they need to do something for the people, and that their extravagant life is unacceptable when there are so many in need. He believes strongly in doing what he believes is right even if it goes against the laws, because if he doesn't take a stand, who will? Bones had tried to capture him several times for going against the law with his vigilante justice but Azaran always managed to stay one step ahead of him. Recently this has changed as Bones revealed that he knew Azaran was Penguinman, but the two have struck out a deal that allows Azaran to continue fighting crime in the city unhindered.

After being in the city for about a year Azaran decided to go back to his home in Normount and visit his family. When he got there he was shocked at what he saw - abandoned houses, a few graves, and not a person to be found. When he went inside his house he found a note that read: "The Collector has returned, we had to go." As soon as he read the name The Collector Azaran knew what had happened. The Collector was a poacher of sorts who made a lot of money on the black market for the beautiful and prized feathers of the Zedkiel's wings. Plucking a few feathers from a wing might not seem so bad, but a Zedkiel's feathers are like adult teeth - once they are lost they will not grow back. Removing the feathers from a Zedkiel's wing is like cutting off a finger, a very painful and bloody experience, and between the blood and struggling it's easy for the feathers to get damaged in the process. This is why it's easier to simply kill a Zedkiel first and take the care and time to remove the feathers in a way that won't ruin their value...

Since they left a note Azaran was hopeful that his family had managed to get away safely. However they would still be on the run trying to evade The Collector and his fellow poachers, and it would be too dangerous to try and contact Azaran further. He had no way of knowing where they had gone, or where they were headed. The Ice Plains were very large and blizzards were always blowing through, so he couldn't even try to follow a snow trail or footprints. His villagers were probably not stupid enough to leave one anyway, so they could not be followed. Azaran was in despair. How could he save his family and the other Zedkiel tribes of the Ice Plains? His mission was to find The Collector and his fellow poachers and bring them to justice once and for all.

Recent Events: Christmas 2016
Azaran became involved in the fight to save Christmas from the corrupt Santa Claus. His true goal however was that he was still tracking The Collector. During the conflict his party was captured by a group of kobolds who revealed they were all Collectors, and he had reason to believe one of them was the one who had killed his family. After a fight to escape their capture, Azaran managed to get his revenge once and for all.

In the course of the adventure he also met a young zedkiel boy named Rasha whose village had also been attacked in the same way as Azaran's own. Once they finished their business with Santa Claus, Azaran brought Rasha to the city and got him set up in the Sanctuary. Much to his surprise Bones paid them a surprise visit wearing casual clothes, providing him money to help maintain the Sanctuary and giving him official permission to act as Penguinman without threat from Bones' government from now on. Azaran is still not sure how he should feel about these events, but slowly he is finding his cynical attitude changing somewhat.

Weaknesses: Being an ice user means that Azaran must keep hydrated at all times, if he becomes dehydrated his powers will no longer work. Also he cannot fight well in a desert because it is too dry and hot. All of Azaran's attacks run on his own energy so if he gets tired he can no longer fight.

Weapon/Combat Power of Choice: He uses a bow to shoot enchanted ice arrows. These arrows Azaran has to make using his own energy, so if he is low on power he can't make as strong of arrows. The plus side is that if he is energized then he will never run out of ammunition. He also uses general ice powers to freeze people. As Penguinman he does not use his bow which helps him keep his identity a secret.

Azaran with his hair grown out.

Azaran in the night.

Azaran with his bow.