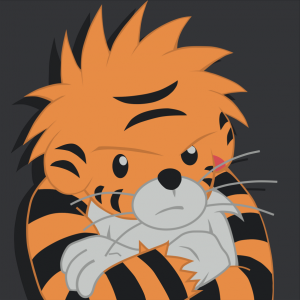 The tiger in the tiger suit.
BasicsAppearanceCharacterHistoryAbilitiesRelationshipsGallery
Played By: Esjitu

Figure/Build: In tiger form, SG2 is stout and bipedal, has seemingly no neck and generally cartoonish proportions - bearing the resemblance of a walking stuffed animal more than an actual tiger. In human form, Tiger is a tall and wiry young man.

Hair/Fur: Orange. In tiger form, it is marked all over by black stripes and has a short spiky 'palm tree'-esque 'hair' style. Tiger's human-form hair is short and spiky, a bit long in the back, and sports a prominent ahoge.

Eyes: Black. In tiger form they are pure black, like the eyes of a stuffed toy.

Skin: Averagely light-skinned in human form. Seemingly pink in tiger form, if the inside coloration of her ears is an indication.

Note: I'd like to update this a bit, just haven't gotten around to it yet.

Though she goes by 'SG2' on paper, this is a shorthand phonetic initialism - her real name is thought to be spelled 'Esjitu'. More confusing still, when she shifts into human form, the resulting young man prefers to go by the name of 'Tiger'.

SG2 is co-owner and head operator of Peach Out Homeslices, a popular pizzeria in IGNO City. Her partner, LG, mostly handles the behind-the-scenes aspects of owning and maintaining a restaurant, while SG2 actively works in the shop itself, making pizzas and serving customers. Her duties have lessened somewhat recently now that she has a full staff of employees. Since most of them are college students from the nearby university working part-time, however, she still likes to be present so there's someone more experienced to manage them.

SG2 was previously involved in another business venture with LG as the co-host on his popular late-night radio program, The Tingle Hour. However, when LG began to focus more on other fields in the entertainment business (namely, his television show and boyband activities), The Tingle Hour shifted to a new schedule and more serious format which left SG2's co-host duties (primarily playing wacky sound-effects) feeling somewhat out of place. While she still makes the occasional guest appearances on the program, this job is more or less considered to be in the past.

Finally, SG2 is a close friend and personal advisor to Konungur Bones, and an official member of his trusted Pantry. Bones often delegates what he considers to be 'menial tasks' related to IGNO City to SG2's care, so her particular duties change from day to day depending on His Majesty's mood. Nonetheless, SG2's face is pretty well-known around the city for being sent to clean up after Bones' various messes, and she holds a reasonable degree of respect among its population.

All claims that SG2 has a private island where she enslaves unsuspecting tourists and forces them to toil away in her mines are unsubstantiated and, quite frankly, rude. Please stop asking about it, it's absolutely not true. Really.

SG2's personality is arrogant, stubborn, cocky, violent, short-fused, curious, short attention span, forgetful. Acts without thinking and tries to solve most problems with violence. Somewhat competitive, sore loser. Pretends to be smarter than actually is - is not convincing.

SG2 is a particularly strange member of the Beast race. Not only does her natural tiger form barely resemble most ordinary Tiger-type Beasts, she has the ability to shapeshift into an ordinary human form rather than a fully animal one, as is more common among her race. Additionally, her gender changes between these two forms. As a tiger, SG2 technically appears sexless, but has historically used she/her pronouns for identification. However, SG2's human form - known as Tiger - is fully that of a young human male.

To make matters more confusing, few of SG2's friends are aware that 'Tiger' is the same person as SG2, due to the obvious lack of physical resemblance (as of the events of Rockin' Around The Christmas Treason, Bones, Karma and Reese know). He tried to remedy this by wearing a personally-tailored suit designed to look like his tiger form...and it did work, to some degree. Now, whenever Tiger wears the suit with the hood up, people recognize him as SG2...but apparently the suit is just that realistic, as they seem to have no idea that she has taken on a human, male form, and is only wearing clothing that resembles her tiger state. The height difference alone you'd think would tip them off, but...well, it's proven a convenient way for SG2 to live a double-life.

Note: in light of the backstory retcon - and SG2 going from a deliberately-overpowered joke character to something a little more down-to-earth - there's a lot I still have to figure out about her backstory. It's basically a completely blank slate at the moment since the old version hinged so much on the backstory we've wiped.

As a result, we basically know nothing about SG2's past - she's got no family, nobody knows where she came from or what she was doing before coming to IGNO City, it's unclear how long she's even been ALIVE. How do you go back into a character that started as a silly online persona 10 years ago and give them a coherent story without it feeling forced? That's my current dilemma, and one I haven't gotten around to sitting down and hashing out yet. Which is kinda lame, because when the administrator's main character - who is also the basis of the site's LOGO - is basically ¯\_(ツ)_/¯ it becomes a bit of a black mark on the integrity of the entire community.

For that, I apologize. I'd advise you to look at Bracken for a better example of my character-building abilities, because right now SG2 is just ¯\_(ツ)_/¯.

Recent Events: Christmas 2016
SG2 recently joined up with her friends to save Christmas. Ultimately she played a much more minor role than Christmases past and will likely forget about the entire thing before too long, as is her tendency.

Skills: Fighting. SG2 has no knack for magic whatsoever, so any use of her elemental powers is purely physical. Her primary use of the Fire element is to snap her fingers and light a single target ablaze (with concentration she can expand the range, but is generally best not pushing herself), or to simply ignite her own body and just...charge the enemy head-on. And fight them. While on fire. Naturally, this is not always the wisest strategy, and can prove particularly dangerous when performed near anything particularly flammable (read: almost everywhere). And though she rarely uses her Earth abilities in combat, SG2 is known for tunneling underground to get from place to place, rather than having to fuss with things like planes and buses. She's always very careful not to dig too deep so as not to branch into the subterranean domain of the Gnomes - since dealing with them is a lot more troublesome than simply hailing a cab.

Though SG2 has the ability to shapeshift into human form, it does have its limitations. The form takes a tremendous amount of energy to maintain, and she cannot remain in it for longer than 24 straight hours (once the time is up, she'll simply revert back to her natural form, regardless of where she is or what she's doing). She can revert back at will any given time before the limit has passed, as well. However, whether she has spent 24 hours or 24 minutes in human form, the 'cooldown' timer remains the same - 12 hours. Until 12 hours have passed, she will be unable to take human form again, and her general energy will be significantly depleted, making her less effective in all forms of combat and physical exertion until 12 hours have passed. As such, it's not the most practical ability for constant use, and she tries to choose her moments for becoming Tiger carefully. That said, there have been many cases of her transforming out of frustration at being unable to reach an item on a high shelf, or something similarly inconsequential, only to regret the strain it puts on her body later. Worth noting, however, that her energy levels are not significantly hindered while she is in the form itself, nor does it require a great deal of concentration (something SG2 is not know for) to maintain. It's only once she reverts back to her natural tiger form that all her energy is depleted at once.

Weaknesses: Though she can be tough as nails when determined enough, SG2 has a very low tolerance for pain and can be incapacitated rather easily because of this. She is also very childish and quick to act without thinking, which tends to make many of her actions backfire. SG2 is quite gullible and it is fairly easy to fool her, so those who can't overcome her with brute force can typically best her in a game of wits. Finally, being as small as she is, you can pretty much just pick her up and toss her out of the way without too much trouble.

Weapon/Combat Power of Choice: SG2 is oddly proficient with nearly any weapon - even if it’s something she’s never used before. Admittedly, this may be a result of her tendency to improvise, whether she's using the weapon 'the right way' or not. Her true love, however, will always be the humble chainsaw.

Tiger with his hood down.

Card of a casual Tiger.

A portrait of SG2.

SG2 jumps off a platform.