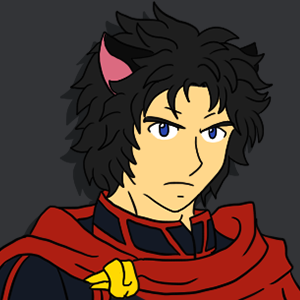 There are some who call me...Tim?Tim
BasicsAppearanceCharacterHistoryAbilitiesRelationshipsGallery
Played By: Tim

Skin: Slightly tanned skin with a Lichtenberg figure in a fractal pattern down his left upper arm

Tim belongs to the Cat race of the Beastmen types. He basically looks like a human with black cat ears on top of his head and a black tail, matching his hair color. His tail is usually hidden beneath his long shepherd's cloak. Since Beastman races have a longer youth period than humans, Tim looks like a young man in his early 20's despite living for 6 decades already.

Tim is usually seen in some form of robed shepherd's clothing, usually consisting of a dark long-sleeved jacket with a long red cloak draped over his shoulders. In general he prefers loose clothing that is easy to move around in.

Personality: Tim is a happy-go-lucky soul who enjoys the company of his friends and associates, who can swing to a serious mood at the drop of a hat. This swinging emotional rollercoaster however can cause problems between him and his friends, which is additionally traumatic for him as he only ever means well and maintains his loyalty to his friends even in hard times. A slight recluse he is happy out of the spotlight reading a book, studying his obscure magical research, or helping look over the flocks of Sheep Country. There is still a lot about him that his friends don't understand which is possibly caused by him being from The Outback with somewhat foreign customs as well as not liking to talk about his past. Yet if you gain his trust and loyalty he will do almost anything to support you in whatever you do.

Tim is a simple farmer and shepherd living in the Sheep Country region of the Outback. He worked for the Outbackian government some 40-odd years ago during the Outback-Empire War as a military scientist, though this past is not known to most, even his closest friends. Tim prefers the simple quiet life among his flock to the bustle of the city, but pays visits to IGNO City from time to time to visit his friends despite the long journey. Though he lives in the Outback Tim is ambivalent to the Outbackian government, and while he is an Outbackian citizen on paper he considers himself to be Neutral. When given the choice to live on Bradios Banks with the Neutral Nation alongside Bradios Tim turned him down, and continues living in his homeland mostly because it is the most comfortable location for him, among the sheep.

Tim's story will be told in greater detail in the WIP story, Chronicles of a Contrite Clonomancer. Below is a brief summary of the story's events.

Tim was a teenager living on his family's sheep farm in Sheep Country during the Outback's war with the Empire. When he got the opportunity to leave his small farm and see the city by signing up for the Outbackian Army, Tim gladly joined and became a combat medic. There he honed his talents and developed a passion for magic.

One day, while trying to save the life of one of the army's combat animals, Tim awakened his natural talent for the art of Clonomancy, a type of forbidden magic specializing in genetically replicating cells. This talent was seen by his superiors as incredibly valuable to the army and Tim was quickly put on the staff in a top-secret program known as 'The Overman Project'.

In his time on the Project, Tim was involved in very ethically-questionable acts experimenting on human patients. The goal of the project was to create the titular 'Overman' - a superbeing who could fight for The Outback and turn the tide of the war. Tim was placed in the bio engineering team, but there were other teams working on their own means of creating an Overman through the use of such things as enhancement drugs and cybernetics. Despite the morally reprehensible methods employed by the team, Tim continued this work out of his love of studying the scientific principles behind magic and general fascination with the human(oid) body. While he did not necessarily approve of some of the methods employed by his and the other project teams, he also didn't object to them - as long as he could continue to perfect his craft, little else mattered.

Of course, that changed. After several months on the project Tim became acquainted with a young man named Bradley and became close to him during their experimentation sessions. Bradley's incredible optimism and desire to feel useful above all else touched Tim's heart and he began to have his first real doubts about whether what they were doing was 'right'...as well as the desire to save Bradley from the horrible fate of becoming a human experiment. However, that did not come to pass, and Bradley was handed off to the cybernetics team for his next round of aptitude testing. After a full day of trying to shut out Bradley's agonizing screams (and his own conscience) the eventual silence forced Tim to conclude that Bradley did not survive the project.

Tim was wrong. Not only did Bradley survive, he had been transformed into a half-man half-machine, fitted with various cybernetic enhancements in what was clearly a very painful process. While Tim was lamenting the role he'd played in allowing such horrific experiments to transpire, Bradley came to. He mistook Tim for a fellow experimental subject rather than a scientist and grabbed him, taking him along as he escaped from the facility. Of course the ensuing explosion of the lab drew plenty of attention and it wasn't long before the Outbackian army in hot pursuit of their valuable project. Bradley managed to leave Tim somewhere safe as he fled deeper into the front lines of battle along the coast, and the entire situation quickly dissolved into pure chaos. Bradley went berserk and began killing soldiers on both sides of the war with no regard for friend or foe, seeing every person with a gun coming at him as a threat. He swept across the battlefield like a wave of death until the Outbackian shore was littered with piles of corpses in his wake.

Tim knew that he had played a role in the cruel fate that befell Bradley, and the blood of these fallen soldiers - not to mention the failed experiment subjects of the project - was on his hands. Ridden with guilt Tim did his best to pursue Bradley by following the trail of carnage, always one step behind. He knew the only way to atone for his sin was death, but he couldn't die yet - not until he brought Bradley back to his senses. When he did manage to find Bradley and calm the boy out of his Warmachine Mode Bradley had already remembered Tim's face, and against his instinct to kill him for his role in the project he was determined to protect him so that they may atone together - by putting an end to the war once and for all.

More things happened after that, though Tim wasn't involved in most of them. In the end Bradley - now going by Bradios - had created a new Neutral Nation floating in the sky, a place where people could choose to live free from both the Outback (which had allowed the Overman Project to transpire) and Empire (which began the war in the first place) governments, a land of peace without war. Bradios had asked Tim to join him and run this nation by his side...but this time, Tim declined. He had made too many mistakes in the past and didn't wish to become part of such a grand thing ever again, and while Brad had taught him to value his life and not throw it away when he could use it to atone, Tim didn't feel this was the right way to do so. Now Tim continues to live in the Outback among the things he left behind in the first place - a simple farm, full of sheep, in the rolling hills of the Outbackian countryside.

Recent Events: Christmas 2016
Tim joined his friends in saving Christmas from the corrupt Santa Claus. His team journeyed to the Nordlands before rejoining the others for the final battle, where Tim held onto Kristof's staff.

Skills: Tim is a skilled mage who has mastered the very rare magical art of clonomancy. This is a 'scientific' type of magic that involves replicating the cells of living beings to construct an exact copy. To do so Tim must first analyze the target's genetic makeup and then essentially 'build' a fresh clone into a new body, so naturally this is a very strenuous magic that takes extreme concentration to use.

Beyond this he is also a skilled singer and dancer, putting these talents to use as one of the members of The Straight Experience. Tim has a well-rounded popularity in the band and is considered by fans to be The Quiet One, though he is also loved by some as The Foreign Hottie because of his Outbackian accent.

Tim also has mild racial abilities as a Cat Beastman, most notably the ability to see well in the darkness, as well as being quite agile.

Weaknesses: As a Lightning user he is weak against the Earth element. He's also very much a mage and unskilled at physical combat (the most he can do is whack you with his crook) and can be beaten easily if you manage to get him in close range.

Weapon/Combat Power of Choice: Besides his talent for clonomancy Tim is a skilled mage in general, preferring various types of utility magic over direct offensive types. Though he is a user of arcane arts, Tim sees the world through the eyes of a scientist, studying not only how to practice magic but to understand how and why it works the way it does as well as its various real-world applications. Tim is also quite skilled in using his Lightning element and has magically enhanced his natural abilities with a special shepherd's crook called The Lightning Rod.

Bradios also built Tim a small device to help assist him in his clonomancy. This device stores a sample of his most recently-scanned genetic material, allowing him to bypass this step and create clones faster provided they are of the same type. Most commonly he keeps a sample of himself in here, using it to create Tim clones - hence it becoming known as The Tim Machine. This may also be because Tim has become reluctant about cloning others due to his feelings of guilt over his involvement on the Overman Project. While this device can be stolen by others, without knowledge of clonomancy, it can't be used to is full capacity. At most you will be able to push a button and get it to pop out a single Tim before it runs out of juice, since Tim needs to keep it charged with his own magic.

A portrait of Tim.

Tim yells at his friends.

Card of a casual Tim.