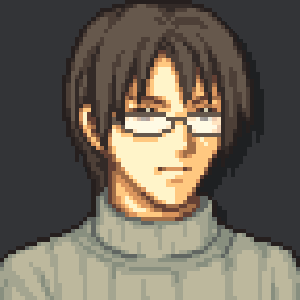 "Cash is just a necessary evil, hun. I take what I need, when I need, from those who don’t need."Phantom Blue
BasicsAppearanceCharacterHistoryAbilitiesRelationshipsGallery
Played By: JaeX

Occupation: Student and Peach Out employee by day, phantom thief by night

Figure/Build: He is unassuming due to his baggy clothing, but is very lithe with wiry muscle.

Eyes: Storm-cloud grey, which sometimes seems to spark with hints of blue when emotional.

Skin: Surprisingly not pale, but not all that tanned either.

By day, Julian is an introverted computer science major at IGNO University, who also works part time at Peach Out Homeslices. By night, he becomes Phantom Blue, a cross between a modern-day Robin Hood and Batman.

Personality: Julian is pretty introverted; he doesn't talk to others when there's no need to talk to them. Small talk will usually earn silence and a tired sigh in return. It's a right pain in the ass to get him to do anything social. However, that doesn't mean he's a soulless jackass. He does listen when nobody thinks he is, and he is understanding. And when he does decide to come out of his shell, he’s pleasant and just an all-around chill dude.

Even then, he doesn’t really express himself with words. He shows most of his emotions through his body language and actions. He may be forced to talk to get by in life, but he only comfortably talks when around those he considers friends. And, yes, he does have a sense of humor, however dry and sarcastic it may be.

As Phantom Blue, however, his personality does a complete 180. Trash-talking when things get tough, being a charming jackass when he gets the chance... It's like he's a completely different person whenever he dons that visor.

However, the one thing that doesn't change is his rage. Normally, he is as calm as the sea on a sunny day. However, he has a short fuse when one pushes his buttons. Some of these include, but are not limited to, his dead biological parents and badmouthing orphans. He is a smart young adult who’s been through a lot and was forced to grow up too early. His rage is not fire, but cold, cold ice, and may whatever diety up there grant you mercy, because he won’t.

Born into a decent family, Julian Silva was pretty much your ordinary kid. However, some jackasses decided to change that when they chose to rob him and his family of everything they have. He managed to hide from them, but his parents paid the price trying to protect him. He lost almost everything that day - his house, many of his belongings, his family - and the men who robbed him came out of all this richer. So, at the tender age of seven, Julian began his life as an orphan with nary the things he salvaged and the clothes on his back.

He was moved to an orphanage, where he learned quickly that life wasn't easy to those without resources. The place was not meant for all the orphans living in it, and it showed. Water and food shortages, poor insulation… He, along with many others, had to steal and scavenge to get enough food and water to not die. There are times when he wanted to give up, but he kept on remembering that he wasn’t alone - that even if his biological family was gone, he still had a family.

As days stretched into weeks, and weeks into months, he was somehow relegated as the boss of the younger orphans in the orphanage. It wasn’t hard to see how, with his almost natural ability for leadership and his selflessness. His influence soon grew and expanded to those older than him. Despite all the bumps along the way, he was eventually named the unofficial leader of the orphanage.

By this time, he was nine years old and was starting to slowly recover from his trauma. It was then that he happened upon a copy of a beginner's coding book that one of his kids stole. Once he started reading, there was no going back - he was hooked. Soon, he got through reading and wanted to do something with it. It took many months of scavenging and luck, but he managed to build a semi-decent computer and began practicing.

By the time he was 12, he had already transferred his status as leader to another kid, and devoted most of his time to coding and tinkering. He was mostly left alone by the others, mostly out of respect, which led him to experiment more and more. He found an interest in hacking and had some fun trying to hack various things. In fact, his little hacking hobby was what got the attention of a rather wealthy family with ties to the R&D sector of IGNO City, when he decided to poke around at the firewalls of one of the family’s projects.

It was quite a shock to find that the one who’s been poking around at an experimental weapon file was a tiny kid like Julian. The head of the family, impressed by little 13 year old Julian’s work, decided to adopt him - and thus began the life of Julian Rundall.

For the next five years, he lived in luxury. However, he always deigned to live very minimalist-like, only taking luxuries when forced upon his person. The only luxury he voluntarily took pleasure in was the technology offered by the Rundall family. He took to honing his coding and tinkering, while doing a little bit of hacking on the side. It got to the point where he could and did reverse engineer older technologies and software.

He was never really much of a social butterfly in schools. Being thrust into a private high school by his adoptive father was something that made Julian regret accepting the adoption. All around him were pretentious snobs or edgy teens. There seemed to be only a handful of decent people in the school, which he naturally gravitated to. So while it wasn’t quite as bad as it could’ve been, he’d rather stay at home then listen to some dumb football game or someone’s dating life.

But persist he did. It was in his last year of high school that Phantom Blue came into being. It seemed like fate or whatever fate-controlling deity had plans for Julian, as the very same crooks who ruined his life decided to ransack his school as well, with a little help. It was when he recognized them that he was overcome with unbridled fury. It was by chance that he was in the theatre when all this was happening. He took a look at what he had to use and a dark grin overtook his face.

In a very Phantom of the Opera-style outfit, he went on to methodically take care of the issue. It was through clever tricks and quick thinking that he incapacitated the criminals one by one. He was seen a few times, but they were quickly disposed of before they got a good look. When it came to the ones involved in the death of his parents, he was very close to killing all of them. And while one of theirs had met their end in his hands, he let the rest go into the hands of the police.

Learning that they were hired to do these seemingly random heists and jobs only served to make Julian more incensed. The police seemed like they already had their hands full, so why not help them?

Unfortunately, it didn't exactly go over too well. They say first impressions are everything, but he seemed to royally screw that up. Julian was very close to being killed on his first job and was shunned by many as a villain. He became a wanted man in his first disguise, so his way of helping police with their jobs seemed like a bad idea.

Eventually, he came up with a compromise. He'll have to do justice by doing what he does best: stealing. Through months of coding and crafting, he had made the prototype of what would be his iconic blue visor. By the time he was in his first few weeks in college, he got a new outfit and some gear, and pulled off his first heist. It was bumpy here and there, but ended in a grand success.

And thus, Phantom Blue was born.

Recent Events: The Big Bad Wolf
What was supposed to be a fairly straightforward heist got turned on its head for Julian when he found that another thief - the wolf girl Zo - had planned to rob the same place. Thus a series of mishaps bungled the night for both...

Skills: Julian is quite the techie. Coding is his favorite pastime, as is inventing. In fact, he designed all the tech he uses as Phantom Blue. This tech is also what's used to help him manipulate his element better.

Hacking is that he picked up after coding and inventing. While he is far from being a master hacker, he is constantly learning and making strides.

His early life also led him to take up parkour, which helped him on more than one occasion. Due to lugging around all the equipment he has, he has a decent amount of strength (for a human) and pretty good stamina and endurance.

Weaknesses: He is a glass cannon. Without his tech, he's really just a regular (albeit nimble and fast) dude with slight control over his element. He's not very tolerable to pain, and can be quick to anger if a touchy subject is brought up.

Weapon/Combat Power of Choice: His main arsenal consists of an arm brace that's pretty much his utility belt. It holds mainly disorienting ammo, such as flash balls, smoke balls, etc. It also holds two grappling hooks, and a short blunted blade that can jut out from the top of his hand. Said short blade acts as a conduit for his inner Lightning, letting the blade grow in length to a more effective size and sharpness. The thing itself is super sturdy and can transform into a kite shield, and the mechanics can only be operated by a Lightning user (takes a bit of practice though).

The futuristic-looking sword, on the other hand, is the weapon he uses when he needs more serious fire power. It, like the bracer, helps Julian use his inner Lightning. It has a compact form, which can act as a makeshift shield, and a rail-gun form, making it able to fire more serious shots of lightning or stakes of steel when needed. It is made of an alloy using some of the hardest metals known to IGNOLand. Like the brace, its different modes can only be brought out by a Lightning user.

His visor, however, is what keeps his identity a secret, and is his most iconic trait as Phantom Blue. It holds many different types of sight augmentations such as night vision, x-ray, thermal vision, etc. He can upload maps of the area, check his status, as well as the status of his weapons, and use it as a phone among other things. It's basically like a video game HUD in front of his face, or like Ironman's AI system, without the voice. Like the other weapons, only a Lightning user can use it since it requires a small, but constant trickle of electricity.

While he is not in his vigilante persona, Julian wears specialized glasses. They work very much the same way as his visor, and is designed to look like regular eyeglasses to be more inconspicuous. It’s a little more disorientating and limited, as there’s not quite as much surface area for things to be on screen.

Zo
Became involved with her - for better or worse - after bumping into her during a heist. Can't seem to avoid her and her problems now, as much as he'd like to.

Card of a plotting Julian.

Phantom with his gear.