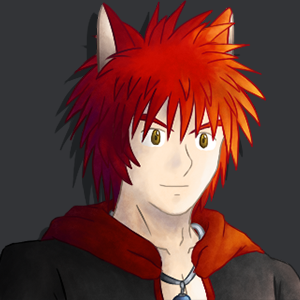 Hair: Tousled medium length, red; feminine aspect has two long tresses on either side in the front of the face with a ponytail in the back, tied with a black bow

In this form Reese may appear wholly human or like a Beastman, with visible fox ears. The tails are usually kept hidden. Reese's male aspect wears a long black duster with an open front to show off his chest. He's often seen wearing white gloves. In female form Reese wears a crimson kimono (still open in the front, but magically never opens too much to be indecent) with black hakama and a white sash. In either aspect Reese wears a silver chain about the neck with a sparkling blue crystal at the end. This crystal is the source of a kitsune's power, and separating from it will instantly cause Reese to revert back to ordinary fox form.

This is the form Reese most commonly appears in. He has historically favored the male aspect but switches more often lately. Waiting for Reese to get me a larger version of this image.

Reese's Hybrid form looks similar to the Fox-type Beast race. His face has a slightly more humanoid look to it than common to Beast races, though his body is somewhat more animalistic - more notably his paw-like hands. In this form his three tails can be plainly seen.

In this form Reese looks almost like an ordinary fox, save for the glowing gold eyes and three tails. Reese does not appear to be able to speak in this form, though some form of limited telepathic resonance may be possible.

This character profile is a work in progress.

Personality, quirks, and other assorted 'about me' information. Essentially, what's your character like? Their general mood and temperament? Do they behave differently around some people, or some types of people, than they do around others? What do they like to do for hobbies, what do they hate? Do they have a job or career, or have they in the past? Other aspects of their overall identity go here too - gender and sexuality, whether they are or are not seeking romance, what their 'type' is, things of that nature.

This character profile is a work in progress.
[I feel as though we can scrap the 'portal from alternate universe' aspect of Reese arriving in IGNOLand in light of more recent universe changes; perhaps he instead fled trouble from one of the other continents and sought refuge in IGNOLand, drawn to its magical energy and knowing his assailants would be unlikely to pursue him to such a dangerous and misunderstood land? --SG2]

What has this character's life been like so far? How was their childhood? What's it like where they live, and what have they accomplished there? Have they moved around a lot? Do they have a family or significant other? Have they been involved in any particular conflicts? Describe anything and everything significant that's happened to your character before the 'present' time. Even if you prefer short and sweet over long and detailed, this section should most likely be your most informative.

Recent Events: Christmas 2016
Reese joined friends in saving Christmas from the corrupt Santa Claus. Reese played a role in the initial investigation and later participated in the final battle. As of these events Reese has become more comfortable in taking on her feminine aspect around friends and it is believed she may continue to appear in this form more often.

Skills: [should put some non-combat skills in here, or general stuff. We know Reese's Roost has a lot of magical automata like golems, so creating these would be an example. Also seems to have skill in reading arcane texts and discovering magical reagents, if Black Books and the plam tree grove are any indication. --SG2]

Weaknesses: Water, cleavage, dogs (kitsune and dogs don't get along), being silenced or having arms/hands restrained (prevents most spellcasting)

-- Fireball: What it says on the tin. Not necessarily as, er, explosive in terms of blast radius as a D&D fireball, but just as deadly.

-- Ki Drain: Reese can suck out the life force of others through their mouths. This is how he maintains his immortality and heals quickly. Very close quarters proximity is necessary. ♥ ♥

--Fenix Firestorm: Reese's last-ditch move. It's an enormous blast wave of white hot super-intense fire emanating around Reese in a dome that uses up all of his magic reserves and leaves him comatose until he can recover enough magic to heal and wake back up. It's a last resort attack meant to (hopefully) kill everything in the radius - should it fail, the unconscious Reese would be quite defenseless, so this is not a move he uses lightly. It may also be used to protect allies by having them stand close to him within the dome.

An old image of humanoid Reese.

Reese gets cozy in his pizza futon.

The flag of Reese's Roost.